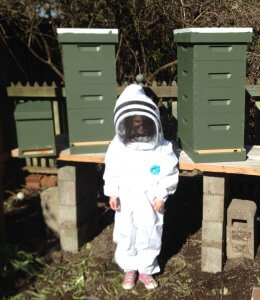 Olympia can be what we like to call, “crunchy granola”.  In touch with nature, mother earth. A little bit of that was always in us, but living here has made us explore that even more. One of the ways we connect with nature is our extensive vegetable gardens. we love growing food for ourselves and guests. In turn we became interested in other things of a similar nature we could do on our property. That is when we decided beekeeping would be a great idea. We became Olympia Beekeepers!

Nathan takes the lead with being a beekeeper with our oldest daughter Lauren just as knowledgeable.  They signed up and attended the Washington State Beekeepers’ Association, Master Beekeeper Education/Certification Program. It took the majority of 2015 to achieve the Apprenticeship Level, but Nathan achieved that, with his assistant Lauren. In fact December 7th, 2015 is the official sign off on the certificate. The classes were held by the Olympia Beekeepers Association, which they became members of in January of 2015.

We registered our two hives, which we received the packages for in April, with the Washington State Department of Agriculture, Plant Protection Division. We only found out this week that your ID number, in our case, “WA 15-166”, stays with us for life.

It might be good to note that the bee hives are kept in an area of our garden that guests cannot access. There is virtually no chance of being stung directly by our bees. In fact our bees would typically forage away from the Inn, with other bees from the neighborhood (and there are more local beekeepers than you would think!) pollinating our yard.

So far we had a fairly successful first season as beekeepers. Unfortunately we had both hives fail. The autopsy put it down to Varroa Mites and poor ventilation. Both of these issues will be addressed in time for the new season. A NUC (starter colony) has been ordered from a respected local queen breeder, and the hope is this will be supplemented by capturing a couple of swarms.

We have used the honey in a version of the scones that Nathan bakes. Made honey butter to die for. As we are better educated and add to our hives our hope is that we produce enough honey to add to our gift shop. However with what we have now, we will gladly consume it all ourselves!

We hope to continue as Olympia Beekeepers for years to come! 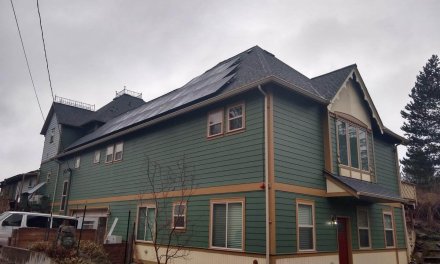 We are a Green Inn